Wigan v Manchester City is never a run of the mill game when they meet in the FA Cup.

In 2013, Ben Watson’s header saw the Latics secure a shock giant killing cup triumph in the 2013 final and a year later they won against the odds with a 2-1 victory at the Etihad Stadium.

The two sides meet once again in 2018 and there has been no shortage of controversy at the DW Stadium.

On the stroke of half-time, Fabian Delph was sent-off for a late challenge on Max Power, which left City boss Pep Guardiola apoplectic.

To add to the drama, referee Anthony Taylor appeared to have the yellow card in his hand before brandishing the red card to the England international.

Moments later, Taylor blew the whistle for half-time and footage from inside the tunnel saw Guardiola and Wigan boss Paul Cook at loggerheads with each other.

The two were eventually separated and many have voiced their outrage at either Delph or the decision to dismiss Delph. Scroll down for some of the best tweets below. 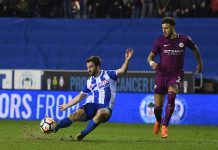 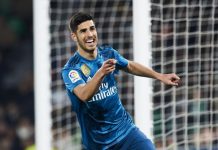 Real Madrid ace Marco Asensio says he has had offers to join ‘five clubs’, including Liverpool, Chelsea and Arsenal