Chris Froome has vowed to provide whatever information is required by the UCI about his use of medication for asthma during the 2017 Vuelta a Espana after a urine test revealed a concentration of Salbutamol double the WADA threshold.

Team Sky said in a statement that Froome experienced “acute asthma symptoms” during the final week of the Vuelta and increased his dosage of Salbutamol, within permissible limits, on doctor’s advice.

The four-time Tour de France winner conducted a urine test on September 7 which revealed a concentration of Salbutamol of 2,000 nanograms, twice the WADA threshold of 1,000.

The Team Sky statement said the “use of permissible dosages of Salbutamol can sometimes result in elevated urinary concentrations, which require explanation”.

Froome said: “The UCI is absolutely right to examine test results and, together with the team, I will provide whatever information it requires.”

Team Sky stressed that the notification of the test finding does not mean Froome has broken any rule but said it triggered a request for further details to determine what caused the elevated concentration of Salbutamol.

None of Froome’s other urine tests taken during the race required further explanation.

Froome, who followed up his Tour de France title with victory at the Vuelta, added: “It is well known that I have asthma and I know exactly what the rules are.

“I use an inhaler to manage my symptoms (always within the permissible limits) and I know for sure that I will be tested every day I wear the race leader’s jersey.

“My asthma got worse at the Vuelta so I followed the team doctor’s advice to increase my Salbutamol dosage. As always, I took the greatest care to ensure that I did not use more than the permissible dose.”

Principal Sir Dave Brailsford said Team Sky will seek to establish the facts and do whatever they can to help with the request for information.

“There are complex medical and physiological issues which affect the metabolism and excretion of Salbutamol,” he said. “We’re committed to establishing the facts and understanding exactly what happened on this occasion.

“I have the utmost confidence that Chris followed the medical guidance in managing his asthma symptoms, staying within the permissible dose for Salbutamol. Of course, we will do whatever we can to help address these questions.”

Italian cyclist Alessandro Petacchi was handed a 12-month ban in 2007 for excessive use of Salbutamol during the Giro d’Italia and stripped of his five stage wins. 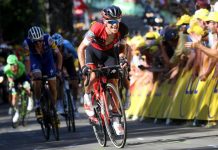 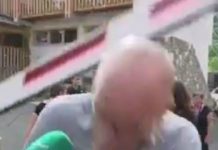