England bowed out of the Twenty20 Tri-Series on a winning note, edging New Zealand in Hamilton but falling well short of the margin required to reach the final in Auckland.

The tourists ended a four-game losing streak with a two-run victory at Seddon Park but it was a hollow triumph, passing without celebration as the hosts’ superior net run-rate carried them into next week’s showpiece against Australia.

There were encouraging performances from fit-again captain Eoin Morgan, whose unbeaten 80 guided England to 194 for seven and another nerveless final over from the steely Tom Curran, but the series has exposed clear cracks in the team’s short-form side.

England showed heart to hang on for the win after New Zealand passed 175 – the mark which ensured their passage to the final – particularly after being subjected to a brutal early rampage from Colin Munro (57 from 21 balls), but it was not enough to gatecrash a Trans-Tasman clash.

Both of England’s openers fell early and identically. Alex Hales mis-read a Tim Southee slower ball and chipped to mid-off and, moments later, Jason Roy was suckered in similarly by Trent Boult.

A modest powerplay score of 41 for two reflected their shaky start but Dawid Malan and Morgan counter-attacked in style.

Kane Williamson’s one-over experiment with his own off-spin saw both batsmen plant him down the ground for six and an emboldened Malan went on to clear the ropes three more times in the space of six deliveries.

After two swipes over wide long-on he danced down the track to Ish Sodhi and launched him into the grass bank beyond long-off.

Mitchell Santner was next to go the distance as Morgan took 21 off his second over, leaving the world’s number one T20 bowler unused for the remainder of the innings.

Morgan was caught on 36 off a Sodhi no-ball, completing a single to give Malan the benefit of the free-hit. He duly launched a looping delivery for six more, bringing up his fourth half-century in five attempts at this level.

When he departed for 53 it started a rut of 17 singles in 23 balls as well as the wicket of Jos Buttler.

Morgan rose to the challenge, ripping into Boult to kick off a flurry of scoring which brought 61 from the last four overs.

There was a possibility New Zealand might find themselves caught between two stools, with half an eye on the winning mark and half on the 175 that would see them to Auckland.

Any such hope was blown out of the water in a few lusty swings of Munro’s bat. David Willey’s second ball flew high over long leg. So too his sixth.

Curran arrived at the City End and suffered a similar fate, ball three swatted on to the roof of a hospitality tent and number four deposited in a pitch-side television gantry.

The game appeared over, but England’s spinners – Adil Rashid and Liam Dawson – pulled things back from the brink.

Where New Zealand’s first six overs brought 77 without loss, their next six came in at an anaemic 26 for two.

Munro’s assault ended when he miscued Rashid’s googly to Willey in the deep and Dawson took Williamson’s middle stump after ramping up the scoring pressure.

The slow left-armer had given just nine runs from three overs but shipped 18 from his final visit, Mark Chapman firing two sixes into the on-side.

The slow bowlers’ success saw Malan handed his first T20 overs at international level, a mixed bag which included a dropped catch, three sixes and a peach to dismiss Guptill.

England’s hopes of making the final ended undramatically, Chapman tapping Chris Jordan for a single at the start of the 18th over to ensure the run-rate.

Curran was left defending 12 from the 20th over and four from the last ball and delivered in muted circumstances. 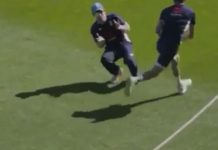 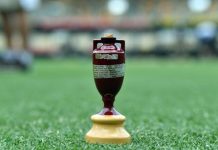 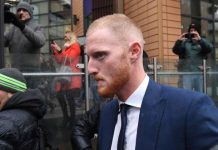