The British marathon runner is set to lose her 2003 record

Paula Radcliffe believes there is nothing to be gained from stripping innocent athletes of their world records.

European Athletics announced on Monday that records set pre-2005, before the International Association of Athletics Federations (IAAF) routinely stored blood and urine samples, would be erased under the proposal recommended by one of the body’s project teams.

Radcliffe set her marathon record in London in 2003 and would be one of the British athletes to lose a world record along with Jonathan Edwards, who set his triple jump mark of 18.29m in 1995.

And Radcliffe revealed her dismay at the victimisation of clean athletes as a part of a wider plan to save the sport of athletics.

“I can understand what they are trying to do – the way they’re going about it is wrong – and to try and wrap it up as doing something for the credibility of the sport and the clean athletes of the future, is very insulting.

“When you’re a clean athlete of the past being told: well you might have lost out on quite a bit already.

“And actually, you’re going to keep on losing, because we’re going to take this away from you as well, and lump you in a bucket with some records we think are suspicious.”

British Olympic gold medallist Darren Campbell has backed the plans as a move towards ‘a greater good.’

“I’m actually going to throw out there, that if Darren held a world record, I don’t think he would be saying that right now.” 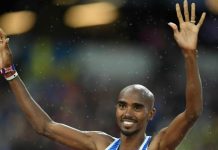