Chelsea winger Eden Hazard has brushed off comparisons with Lionel Messi ahead of the Champions League clash against Barcelona.

The Blues host the La Liga leaders in the first leg of the last-16 tie on Tuesday with the game pitting Argentina forward Messi against Belgium playmaker Hazard.

Hazard described Messi and Real Madrid forward Cristiano Ronaldo as “the best in the world” at a pre-match press conference.

He said: “First it is good to be compared with the greatest ever, but I am completely different.

“We play in different leagues, I try and do my job, I try to reach that level, their level, because they are the best in the world.

“To play against Messi is always good, I did once in the World Cup and we lost the game so I hope tomorrow is going to be different.”

The 27-year-old also declared himself happy at Stamford Bridge despite speculation over his future.

“First, I see the game tomorrow. We are going to face Barca,” said Hazard.

“I have played for Chelsea for six years and I am happy here. I have two years left on my contract. I don’t think a lot about the future.”

Chelsea manager Antonio Conte said: “For sure we are talking about a massive game.

“We have to play against a fantastic team, one of the best in the world, but this type of game we must be excited to play. For sure it won’t be easy.

“I think we start this game as underdogs for sure because Barcelona are favourites to go to the next round.”

On the prospect of facing Messi, the Blues boss added: “We are talking about the best player in the world.

“Messi has the capacity to solve situations, create a chance when you are not seeing the chance to score. This means we are talking about a fantastic player.” 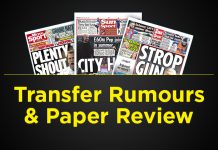