The ninth seed had been tipped as one of the contenders for the title in a wide open field after reaching the semi-finals and quarter-finals in the last two years.

Konta looked in good form in her opening win over Madison Brengle but struggled to find her game in very hot conditions at Melbourne Park and came up against an inspired opponent, who claimed a 6-4 7-5 victory.

Pera, a Croatian-born American ranked 123, had never even played in a grand slam tournament let alone won a match before arriving in Melbourne.

She appeared to be going home after losing to Viktorija Golubic in the final round of qualifying but was given a place in the main draw following Margarita Gasparyan’s withdrawal and has seized her second chance spectacularly.

Pera looked comfortable from the off and had Konta on the back foot with the quality of her ball-striking.

The British number one, meanwhile, was not serving nearly as well as she had against Brengle and her backhand, normally her best shot, was badly out of sorts.

A fine returning game from Pera at 4-4 in the opening set saw her break Konta to love and the 23-year-old confidently served it out.

Konta has been open about the mental struggles that stemmed from her five-match losing run at the end of 2017 and it was clear that the reserves of confidence she had 12 months ago are nowhere near as deep.

An awful drop shot when she had the court at her mercy allowed Pera to retrieve an early break in the second set and the Wimbledon semi-finalist was in huge trouble when she dropped serve again in the seventh game.

While Konta struggled, Pera continued to power away winners – she hit 26 in all – seemingly unperturbed by the magnitude of the victory in her grasp.

Konta must have known it was not her day when she mis-hit a second serve so badly it landed on the baseline but she fought to save three match points at 5-3 and then was rewarded with a break back when the nerves kicked in for Pera.

But still Konta looked so on edge and Pera was given another chance to serve for the match when the ninth seed slipped over at the most inopportune moment.

Konta’s day was summed up with she shanked a smash for the second time in two games to give Pera the win of her life.

It is the latest grand slam disappointment for Konta, who, as well as her brilliant runs at here and at Wimbledon last season, lost in the first round of the French Open and US Open, and her ranking will now drop. 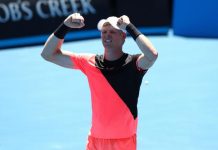